A most serious and distressing accident happened here early on the morning of Monday ___ (1821); when it was discovered that Henry Joshua Rowley nephew of Sir W. Rowley had fallen from the top storey of Stelfox’s into the area below. He was immediately taken up insensible in a most shocking mutilated state, & tho’ every attention & advice was administered, he lingered on but for about 24 hours. The occasion of his fall could never be ascertained. The following was the verdict of the Coroners inquest held on the body. “The deceased came to his death by fall from a window but how it was occasioned there is no evidence to prove.” H.J Rowley had lately got into the 6th form, and with the exception of the melancholy case of Parry (no. 34) is the only incidence of any death whatsoever happening here for a very considerable number of years.

We have been able to do some additional research surrounding this disturbing incident.  Our first port of call was The Times newspaper on 11th April 1821, in which the inquest was reported:

Yesterday afternoon an inquisition was held before J.H. Gell Esq. in the organ-room, adjoining the Jerusalem chamber, Dean’s Yard, Westminster, on view of the body of Henry Joshua Rowley, the nephew of Sir. W. Rowley, and one of the scholars belonging to Westminster school, who died the preceding morning from the bruises received by falling from a window the preceding day.

Master Percival Walsh deposed, that he was one of the scholars in Westminster school belonging to the 4th form; the deceased was in the 6th form; he always considered him to be of sound mind and intellects; he had not seen him on the morning of the accident.  His bed-room was on the first floor, back part of the house of Mrs Stelfox, where he and the deceased boarded.  He was in the passage about half past 8 o’clock, when he heard something fall, and then he heard Price, the glazier, say “For God’s sake send for a doctor, somebody lies in the area”, or words to that effect.  At this time the glazier was coming down stairs.  Witness ran out immediately and saw the deceased lying in the area.  The glazier then went into the area alone, and he (witness) fell back, terrified at the sight.  He was requested by Dr. Goodenough to call Rowley; but not finding him in his room, he asked the housekeeper to halloo him, which she did while he remained on the ground floor, but there was no answer.

It is the custom for a return to be made every morning in the school of the absent boys, as soon as it can be made out, after I enter the room.  On Monday morning the name of the deceased appeared in the list.  Upon my coming to the fourth form, I enquired of Mr. Preston, the usher of that form, and also usher of Mrs. Stelfox’s boarding-house, whether he had Mr. Preston’s leave of absence, and finding he had not, I sent Walsh, of  the fourth form, to look for him, and send him into school.  Walsh returned in a few minutes with an account of the melancholy event.  The deceased had been more than 12 months in the school, and upon first coming was placed on the shell form very high for his age, and in a form very few boys are put on their first coming to school.  The deceased always conducted himself uniformly well, and even with distinction for his removal into the sixth form, and went through that examination with very considerable credit.  During the time he was in the 6th form, up to the moment of his decease, he had invariably conducted himself in such a manner as to merit, and to receive, frequent and decided commendation, and he looked upon him as a boy of very great promise.  His intellect was at all times remarkably sound, distinct, and acute; and his manners were always gentle, cheerful, and agreeable; and he might be reckoned to have been on familiar terms with me.  He had had no task, punishment, threat, or apprehension of punishment, in any shape whatever, nor had he any reason to expect or apprehend any punishment on account of his absence that morning, on the supposition of his being at his boarding-house.  Sending for the boys under the circumstances of absence similar to those of the deceased is a constant practice.

G.W. Rickets, Esq. stated he had known the deceased from his infancy.  On Sunday last witness breakfasted with Sir William Rowley, in Lower Grosvenor-street, when the deceased was present; he appeared in very good spirits, and he asked him several questions respecting his school fellows at Westminster, all of which he answered in his usual lively manner.

Sir William Rowley, uncle of the deceased, fully corroborated the former witness’s testimony respecting the boy’s manner and behaviour.  The deceased had attended him (Sir William) to church on Sunday, and afterwards went on a visit to his maternal uncle.

Mr. George Preston, usher of the boarding-house, deposed that he gave the deceased leave on Saturday to go and see his friends, who appeared highly delighted.  On Sunday night he went round the room, it was about half past eleven o’clock; and on examining the beds, the deceased was there, and apparently fast asleep: he does not conceive that his mind was in the slightest degree bordering on a state of derangement.

The jury returned the following verdict: “That the deceased came to his death by a fall from a window; but how it was occasioned there is no evidence to prove”.

The records of the Coroner’s inquest are held in Westminster Abbey Muniment room, next door to the school.  The inquest took place on 10th April 1821.  Although the account printed in The Times and transcribed above gives a detailed account of events, further details can be gleaned from the records of the inquest.

After Rowley’s fall William Pickhett of Dartmouth Street, Apothecary, ‘went immediately and examined him  – I found him on the bed perfectly insensible there was a wound on the back part of the head and a compound fracture of the right leg.  I attended him til his death which took place this morning 20 minutes past nine.’

At the end of the Coroner’s notes is this important detail:

Price the Glazier on being told…that he must attend, absconded.  I sent several times after him and every Public House in his Neighbourhood…At last I sent a warrant to compel his appearance but he could not be heard of anywhere.

The Linnean Society archives hold a letter from Dr Goodenough’s father to Sir James Edward Smith on 19th April 1821, which provides inside information on Rowley’s fall as well as Head Master Goodenough’s impending marriage (see No 36 – to be published later this week).  The second paragraph on the page below reads:

My son Edmund has had very ill luck to have two such things happen in so short a time.  The Glazier’s non-appearance strikes me as something odd.  The young land had locked the door of his room – the Glazier was at work in the story below his room – I cannot account for this otherwise than that this Glazier saw too much. However I have no right to say anything upon the subject, not having seen my son since the accident happened.’ 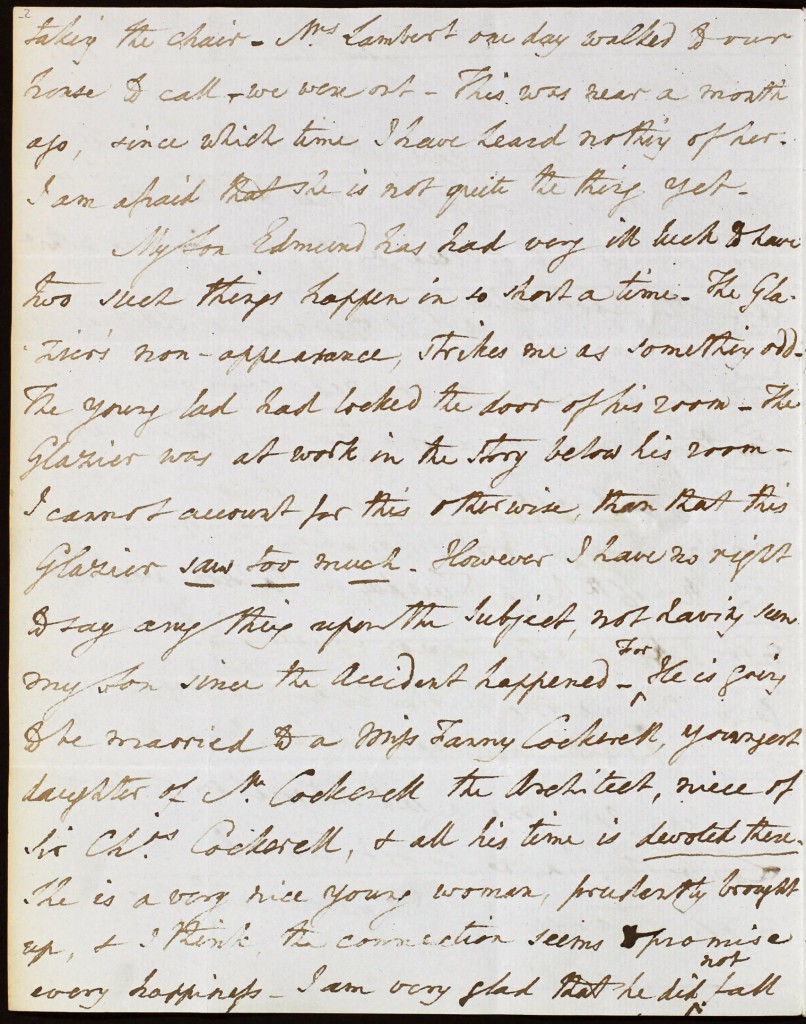 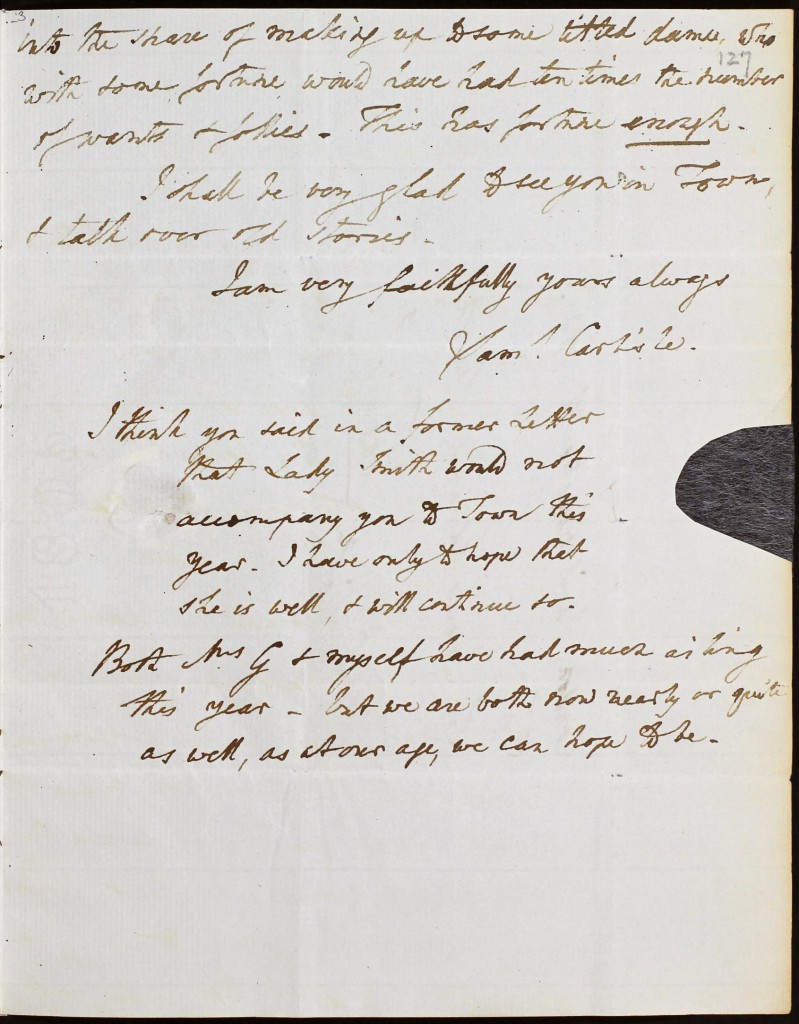