In March 1821 The Dean instituted a prize of books to be given to the best composition in Latin Verse upon any given subject, which the Head Master should propose. The subject this year was “Romulus”.

A melancholy accident having occurred in the death of L.J Parry a boy of the fifth form, in consequence of his having over eaten himself in a frolic in which he was engaged with others in the hall, at Miss Bests, it seemed fit to Dr Goodenough to forbid anything like broshiering for the future; and to that effect he issued a set of rules of which the following is a copy –

In consequence of the evident impropriety and manifest danger, of the wanton of and excessive eating, alike destructive of good order, and prejudicial to the health which has at different times, and under various pretexts taken place in the boarding houses, and with a view to prevent any such occurrences for the future –

It is hereby ordered,

That whenever the eating on the part of any boy or boys shall appear to the mistress of a boarding house to exceed the bounds of a fair and wholesome meal; she shall immediately and upon the spot represent the  case to the Usher of the house, and, if he shall accidentally be absent, the mistress of the house shall immediately send to the Usher of some other boarding house, or in their absence to either of the masters: any of whom repairing to the house, will immediately order the Hall to be cleared in case her statement shall appear to be well grounded; and upon a representations being made to the Head Master, which shall in all such cases be done, such punishment will be inflicted upon offenders in this respect; as the nature of the case shall appear to him to demand E.G – This entirely putting a stop to that Barbarous custom.

Many thank to all those who helped us discover the meaning of ‘broshiering’.  You can now read the comment below or click through to our glossary to find out more.

The word that appears to read broshiering appears in this entry  – any pointers as to its meaning would be very much appreciated.  Here is a photograph of the word as it appears in the text for you to decipher! 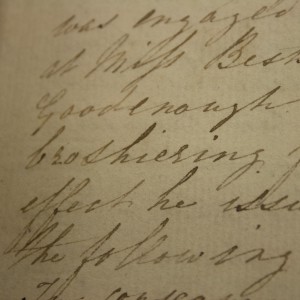 The sixth dinner having last year been carried on so openly as to render it in the Dr’s opinion, impossible to be winked at any longer, he laid down his strict prohibition upon it. And in consequence of the threat of expulsion which he held out to anybody and all that should be engaged in it combined with other reasons, it was this year dropped entirely. Though not without great animadversion upon the conduct of Dr Goodenough in thus having put an end to a custom which has been so long established and so long winked at by the Head Master.