On Monday Dec 15th being the 3rd performance of the Eunuch in College the King attended according to his gracious promise. A covered way was erected from Williamsons door to College door through which his Majesty passed about seven o clock and was received with immense cheering. He expressed himself well pleased with the performance and generously contributed £100 to the cap and asked for an extra weeks holidays. 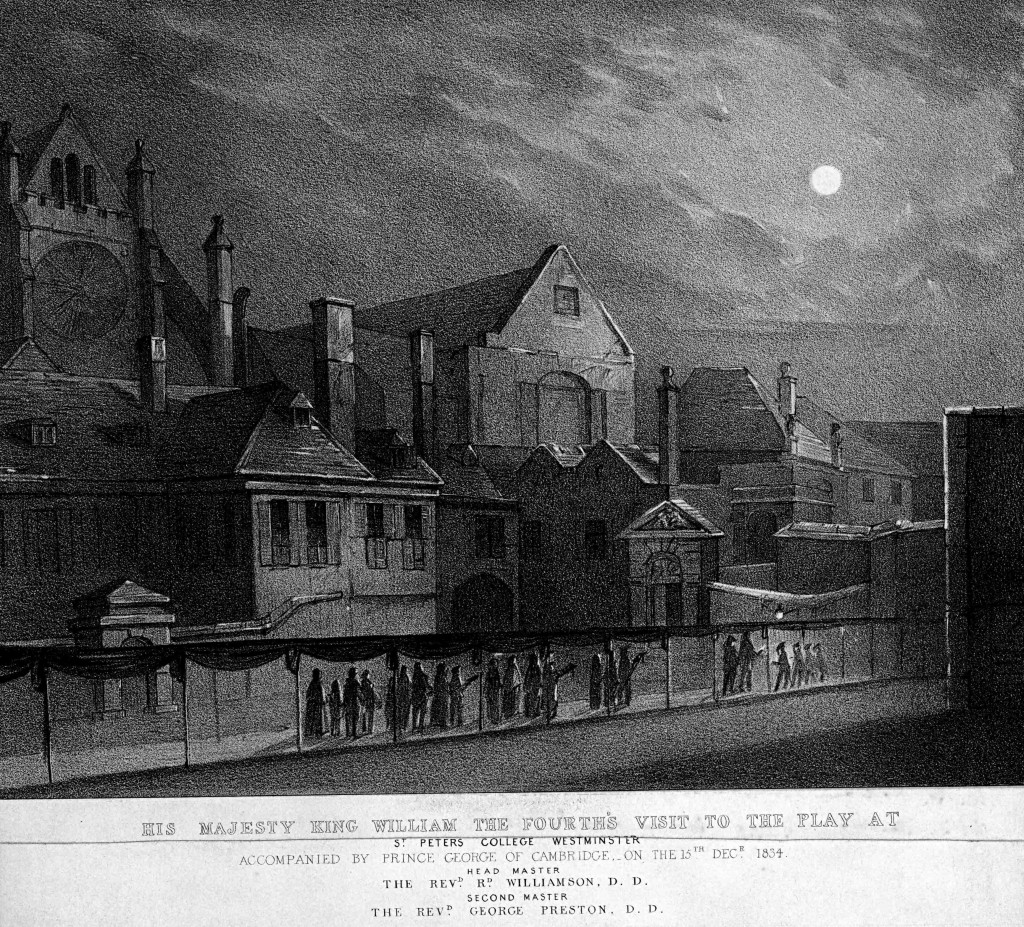 The list of the Sixth at Xmas 1834 was as follows

On Wednesday Dec. 10th the annual sixth dinner took place as usual, but in consequence of the threats denounced against it by Williamson it was through proper to leave the place when it had been lately held, both in consequence of its proximity to Westminster and its being known as the usual place for the dinner it was this year held at the Café de L’Europe on the Haymarket where it was served at in a manner to give universal satisfaction. It was kept up till half nine with great spirit.

On account of the death of his royal highness the Duke of Gloucester which took place on Sunday evening Dec 30th 1834, it was expected (as is usual on such occasions) that the College Play would be stopped, and orders to that effect were issued by the Dean and notice given of it by Williamson in the afternoon school of the following day (Monday) who at the same time told Vernon (the Captain) that he might take any means in his power of getting leave from the King to have it acted as usual.  Vernon accordingly found out that Sir Herbert Taylor was the proper person to communicated with his Majesty on the subject.  Upon this White an old Westminster residing in College St. who had been on the most intimate terms of friendship with many of the Westminsters and to whom he had always behaved in the most honourable, gentlemanly and generous* manner, but who had become obnoxious to the masters by betting with the Westminsters, and having as was falsely asserted by them broken his word with Smedley and Williamson) knowing Sir H. Taylor, offered his assistance to the Seniors, went to Sir H. T. and having an interview with the King obtained his sanction for the play being acted, and gave out his gracious intention of patronizing Westminster by coming to the play on the 3rd night.  Accordingly on the following Wednesday the Eunuchus was acted – when the 6th having dined together in Grants, took their places in the pit and White likewise happened to seat himself among them.  The first act having passed off, Williamson requested White to withdraw asserting that after his recent conduct he did not consider him a fit person to associate with his boys, adding that he should have recourse to force it White did not absent himself.  Upon this White withdrew; and the sixth incensed at the conduct of Williamson withdrew likewise with the exception of March* who from some cause or other did not come.  Williamson taking it as it was intended as a direct insult to himself gave the sixth to understand through the ushers, that unless he received an apology before 8 o clock the next morning the consequences would be very severe.  The Sixth however resolutely resolved to make no apology and abide by the consequences and a heavy imposition was the result.

*and Williamson then gave out that any one seen associating with White would be severely punished.

*Though ill the winter of 1834 White had behaved to the Westminsters in a very gentlemanly manner, yet on account of his inability to discharge a quantity of bets with them amount to considerably more than £200, he made several false appointments, and acted altogether in a manner totally unworthy of a gentleman, and a man of honour.  It was subsequently disclosed that he had told several falsehoods, professing to have an independent property of £800 per annum and other circumstances wch have since been disclosed to be totally false and unfounded.  It is therefore but natural to suppose that he had betted (not possessing a farthing) with the hope of becoming the creditors of several Westminsters but in consequence of losing them he had recourse to falsehood and trickery of every description.

*The Revd H. Hodgson (with whom March boards) called him by name, and putting his hand on this arm stopped him.  It is therefore obvious that, he was prevented doing what the rest of the 6th and 2 of the upper Shell did (one being a peers’ son sitting there by right Ld Somerton) and the other C.D. Osborn. Being placed there by the civility of the K. Scholars, the writer, therefore of the description of the play (RH Hurst) must have had some private reason for omitting this explanation, which he must have been aware of.

This order was soon reversed and Williamson sent to White to say that he should be most happy to see him at the play on the second night, thereby openly taking off all restriction when he found it impossible to enforce it.

The Revd Mr Braine having obtained the Mastership of a school at Camberwell*, resigned his place as Usher at Westminster, and in consequence Miss Stelfox’s Boarding House was left without an Usher, and Williamson not chusing to engage an Usher to supply his place, caused Miss Stelfox’s Boarding House to be shut up and the Boys in it to be distributed between the Houses kept by Miss Scott and the Revd Mr Bentall.

A Rowing Match having been agreed upon between Preston and Astley (TB) versus Savile and Drew (KS), Roberts through jealousy, on account of their not using his boats (which are considerably too heavy to race in) informed Williamson of it, who instantly stopped it, and set the parties concerned in it an Impositions of such a nature as to prevent them from racing for the remainder of the half.

Those marked with an asterisk are Home Boarders

On Friday June 11th 1834 the annual grand match was played in Tothill Fields, between the Town Boys who had not played in the Grand Match of the preceding year and the Lamprobaticks, in which the former were beaten by 102 Runs in one innings

Those marked with an asterisk are Home Boarders

A challenge having been sent to the Etonians to play us at cricket a refusal was returned. Their reason for refusing us which they alleged was that they never had time to play more than two matches, and that they always played with Harrow and Winchester, so that unless one of the above mentioned schools declined the contest they could not play with us.

An attempt having been made by the KS to take two boys in the Shell into College, in order to inflict some punishment upon them, a strong remonstrance was made against it by the Head of the T.B. and the remainder of the Sixth, and it was prevented from being put into execution.